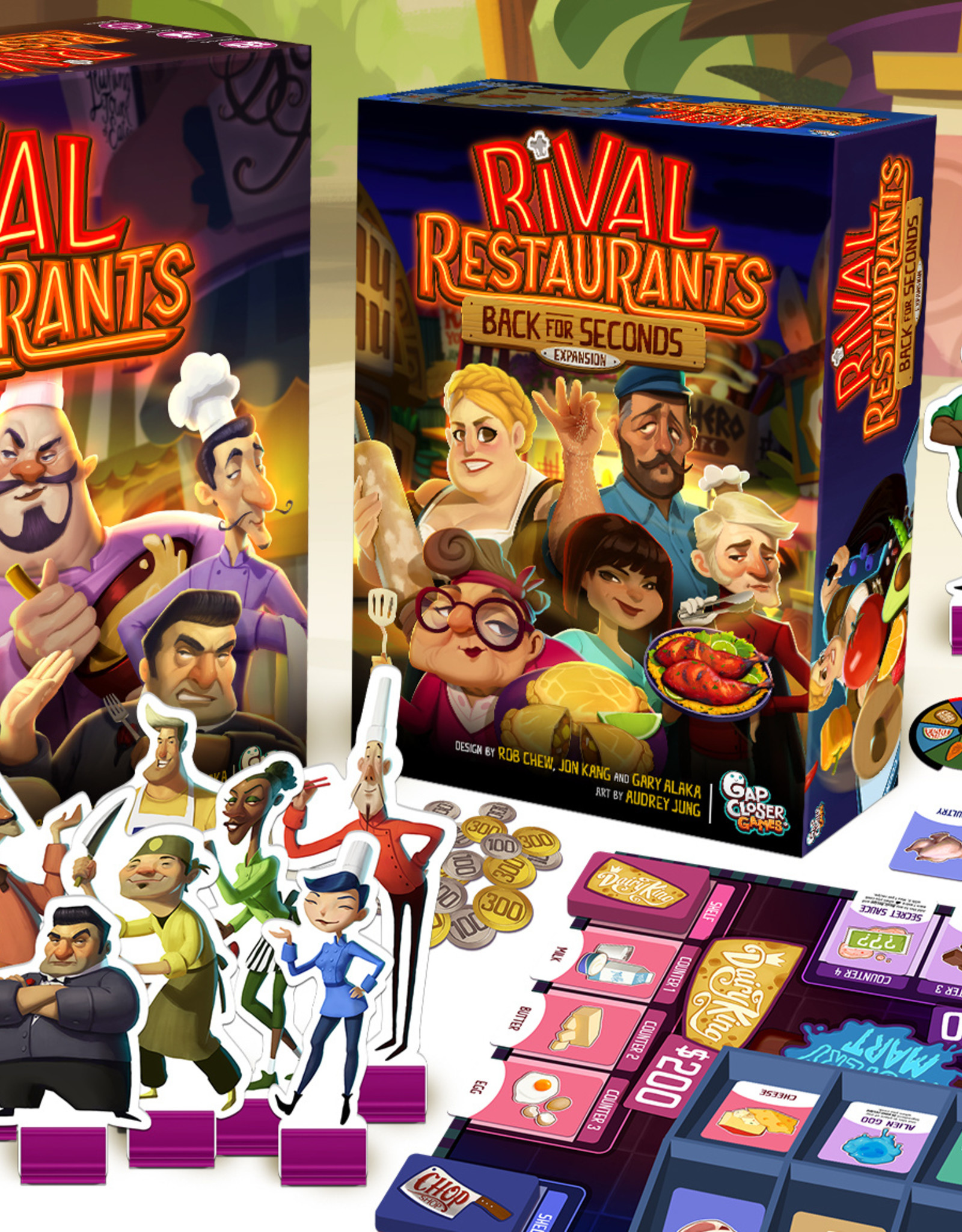 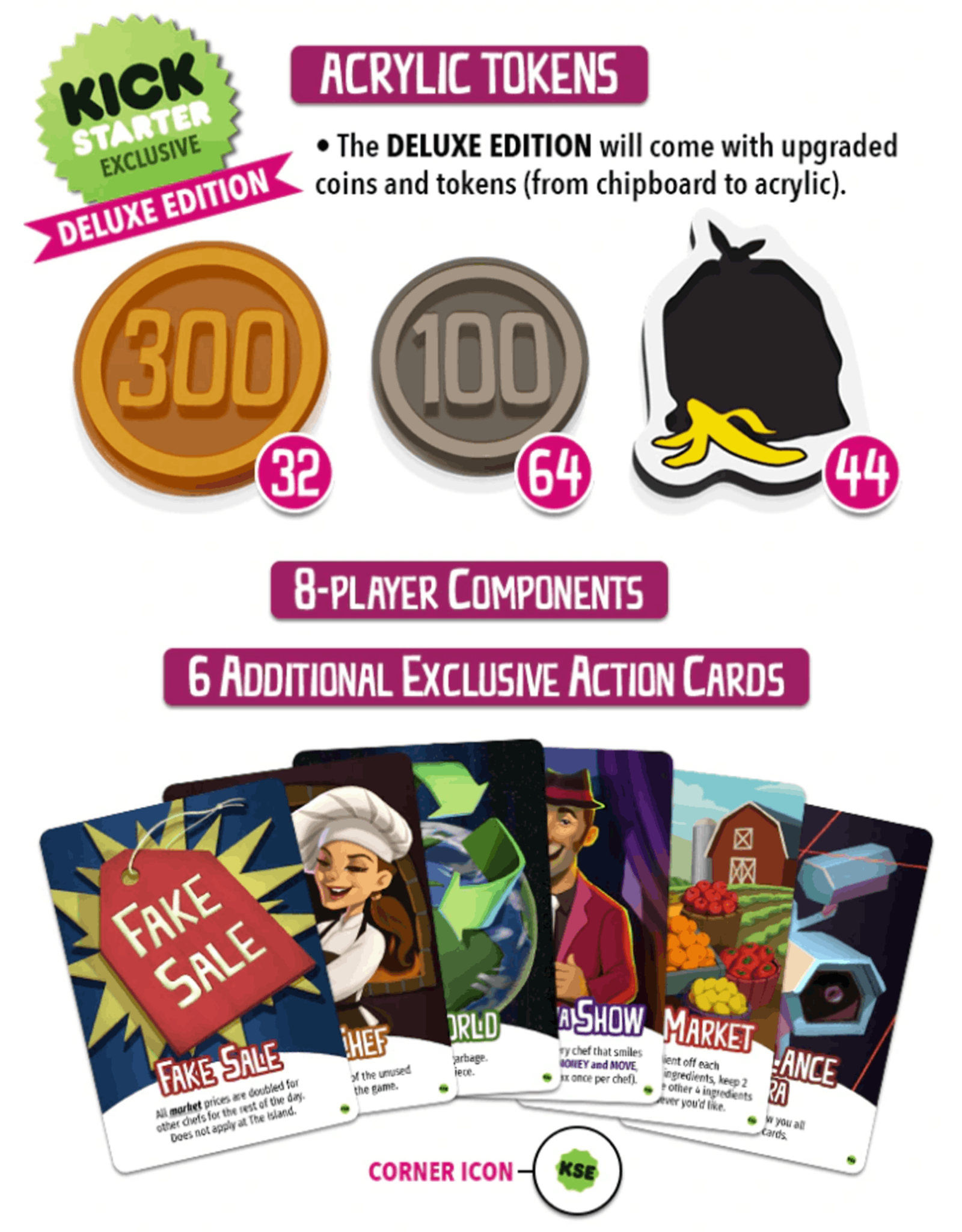 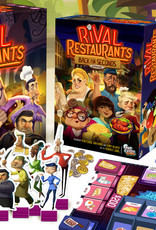 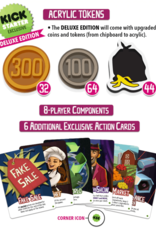 Rival Restaurants is the competitive restaurant owning game where food meets fun! Will you beef up your restaurant with maximum upgrades? Make saucy trades and focus on completing recipes? Or chop up the competition with game-changing action cards? The choice is yours. But remember, in the race to become "The Hippest Spot in Town," there can only be one "Wiener!"

The goal of Rival Restaurants is to be the first restaurant to get to 20 popularity points and be crowned "The Wiener!" Players earn popularity points by buying and trading for ingredients and using them to "cook" (complete) recipes. The more advanced the recipe, the more points it's worth.

Each day, players move through three phases: 1) MONEY and MOVE 2) BUY and BARTER 3) COOK and COUNTER. During each phase, players act simultaneously. In other words, there are no "turns" in Rival Restaurants making it a fast-paced game with very little down time.

During MONEY and MOVE, players collect their income for the day and decide where they want to move. Turn economy is crucial as players are not permitted to move for the rest of the day once their location has been chosen.

The next phase, BUY and BARTER, is where Rival Restaurants really comes alive. Players have 1 minute to buy as much as they want but only from the location they're in. Players can also barter/trade with anyone in the game (not just the people in their location).

In the last phase, COOK and COUNTER, any player who has all the ingredients required for their recipe can cook their recipes and collect popularity points. The first player to reach 20 or more points wins the game!

In addition, each player controls a chef equipped with his/her own "chef power." Chef powers are asymmetrical and allow players to bend the rules in their favor. There are 12 chefs in the base game of Rival Restaurants. Additionally, at the beginning of the game, each player must choose a restaurant to play with. Each restaurant has a unique level-up structure with rewards for reaching 3, 7, and 12 popularity points. Lastly, players can also choose to buy "action cards." Action cards are development cards that are typically for one-time use.

With 12 unique chefs, 8 different restaurants, 48 delicious recipes, and 21 action cards, no two games will ever be the same!

In the quest to be named "The Hippest Spot in Town," aspiring chefs and restaurateurs must do whatever it takes to be crowned "The Wiener!"

In Back for Seconds, Rival Restaurants's first ever expansion, players will enjoy 8 new chefs, 6 additional restaurants, and 9 brand-new action cards. However, the biggest addition to the Rival Restaurants universe is...the Event Deck.

The Event Deck features 15 Event Cards. Events are activated every other day and affect all players. Players see events one day in advance so that they can prepare and strategize accordingly. The Event Deck is sure to spice up the competition as players are forced to adapt their strategy on the fly.